The information in this blogpost may now be out of date. See the current GOV.UK content and publishing guidance.

Translated editions of documents have been a feature of Whitehall for some months now. To date, the only way to have a document in a language other than English was to first have an English document and then create a translated edition.

But now we have released a feature that permits the publishing of Worldwide location news articles without there having to be an English version.

The steps involved are: 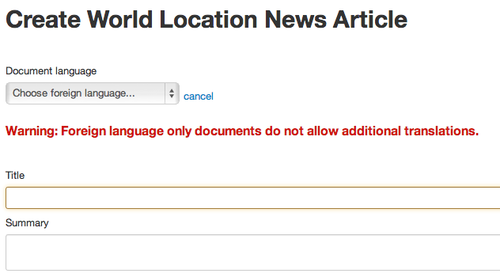 It is as easy as that. But use sparingly because you can’t add subsequent translations and URLs get a numerical ID rather than a meaningful, human-readable slug.

The product team aren’t keen on this one. Pressures was applied to a replicate a feature of the previous FCO platform but we didn’t think the user need was at all clear. There is definitely a need to translate content but we can’t see why that content shouldn’t also be in English.

We’ll keep a keen eye on its usage and performance.