On 9th April we made major changes to the Inside Government navigation bar by 1) exposing the sections rather than nesting them and 2) moving the search query field to the left.

This was in response to user testing that suggested users were having difficulty finding some content, such as consultations which had been in a drop down under publications.

I’ve done some analysis of the impact that this had on pageviews to the different sections. I’ve looked at the data two weeks prior to the change and two weeks after the change, avoiding the Easter holiday period (“Get involved” and “Worldwide” were omitted as they were not live through the entire period) 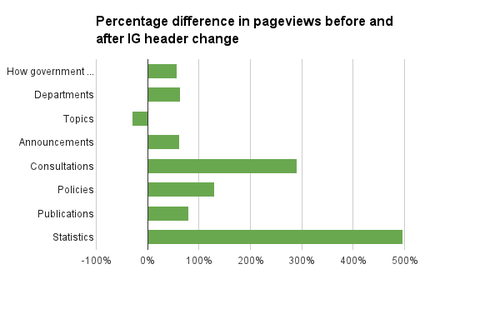 Because the new nav bar also meant a change in the position of the search query field and I asked my colleague, Tara, to look at the impact that had.

Tara found that searches for publications and consultations dropped most visibly, suggesting that those nav links have made a difference.

The exact terms ‘policy’ and ‘policies’ decreased slightly, but numbers were low so not very significant, whereas longer terms containing ‘policy’ or ‘policies’ increased by 22% and 24%. Some other terms also increased, but by less than the total Inside Government searches (about 25%), so really they all still dropped slightly.

Other good news is that changing the design of the search box has reduced the number of users clicking the search button without entering a search term.

In summary, I think that this analysis points toward the changes to the nav being positively received by users. But we’ll keep an eye on it and keep tuning it as we go.