Editors often want to be able to preview their content as it will appear on the site, before making it live. Some of our publishing tools support this – for example Whitehall Publisher – but they’re not very consistent, and many of them don’t support it at all.

As part of the technical rework we’re doing behind the scenes, we’ve been gradually migrating all of the publishing tools to a new publishing architecture. Generally this means no changes for editors and end users, and for the most part the migrations go without notice, but one advantage of the new architecture is that enables a consistent way of providing on-site content previewing.

The latest tool to gain this new functionality is Specialist Publisher, which is responsible for publishing manuals and specialist documents such as AAIB reports. Previously, the tool provided a simple way to preview the body of a document, but this didn't show the content within the context of the site itself, so its use was fairly limited. Now, though, any document which is in draft, or has unpublished changes, will gain a 'Preview draft' link:

Clicking on this link will take you to the draft site, which provides a complete representation of the document as it will appear once it’s live on GOV.UK. Pages are watermarked as 'draft' to give a visual indication that this is not the live site. 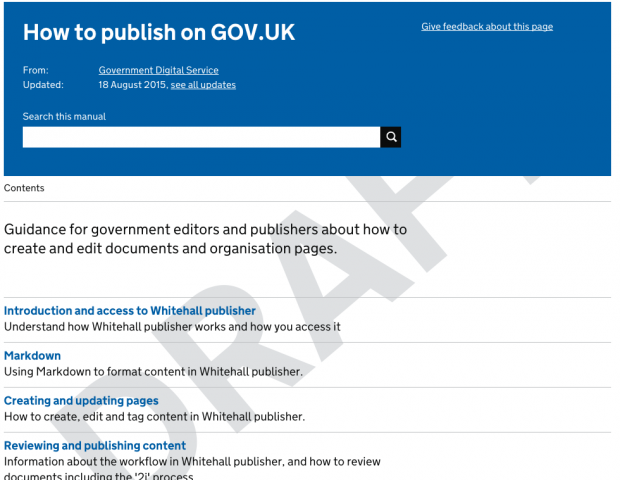 For now, only a few formats are sending their data to the draft site, so if you click around outside the document you’re previewing you’ll probably see some errors. Eventually, though, as more publishing tools and formats are converted to the new architecture, the draft site will become a full representation of the site with all content ready to be published, as well as existing published content.