GOV.UK has been working hard to migrate formats to use the new publishing platform over the last year. By the end of April, we expect to have migrated 16 Whitehall formats, with many sub-types of content, totalling almost a quarter of a million documents. 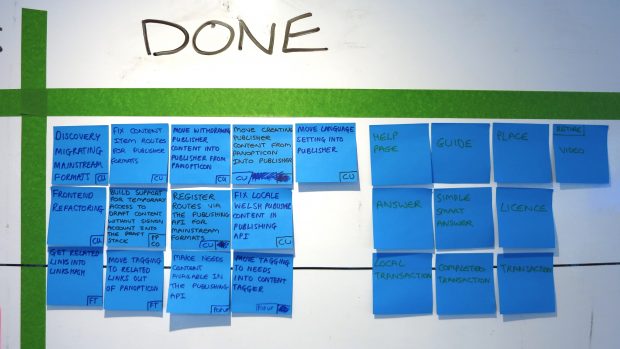 This work is important because it reduces technical debt and enables us to speed up and start the work we’ve planned for the 2017 to 2018 roadmap. We blogged about the benefits of using the new publishing platform last year.

We’ve also been migrating mainstream formats to use the new publishing platform. I wanted to explain how we’ve approached it and give an update on the progress we’ve made so far.

What are mainstream formats?

By mainstream, we mean the formats that meet the most common user needs for citizens coming to GOV.UK. There are 13 mainstream formats, which made up 55% of pageviews on GOV.UK in the last 12 months. This was a little bit daunting for the team - we were concerned about causing disruption to a large number of users if something went wrong.

Mainstream Publisher - the publishing application used for publishing mainstream formats - is one of our oldest applications and is heavily dependent on our old publishing architecture. This makes migrating these formats complex and a bit risky.

We learnt from the work on Whitehall migration that migrating formats can be really complex and we wanted to identify any complexity as early as possible.

Our aims for the discovery were to answer 3 broad questions:

1. How should mainstream formats work using the new publishing platform?

Here we looked at:

2. How should we migrate the formats to use the new publishing platform?

Here we looked at:

3. What dependencies are there on the publishing platform team?

Here we looked at what would block us technically from being able to migrate each format.

Completing the discovery meant we were also able to make important decisions about the scope of the work, for example:

We also decided to retire 4 formats:

We simplified the old publishing architecture to make migrating individual formats simpler, quicker and less risky. Sharing this work across multiple product teams was a good example of working collaboratively to achieve a common goal.

We’ve also been able to retire an old application (Panopticon) which was responsible for tagging content to browse pages, topics, organisations and other related content. It was also responsible for unpublishing content and managing URLs. We’ve significantly reduced the complexity of migrating each format by breaking their dependency on Panopticon.

We started by migrating help pages, because there aren’t many of them and their traffic is fairly low. Since the team hadn’t worked on migration previously the developers used mob programming for the first format. This was a great way for the team to develop their knowledge together.

Since then, we’ve been working in pairs to migrate the remaining formats - we’ve done 7 of the 9 so far. We’re really happy with the progress we’re making and think spending time on discovery and the preparatory work has made the process of migrating a format much quicker and simpler.

Getting over the line

When we’ve migrated all mainstream formats to the new publishing platform, we’ll have significantly reduced technical debt in our platform and simplified our architecture. We’re confident we’re on track to finish by the end of March so that we’re in a good place to start on the 2017 to 2018 roadmap in April.