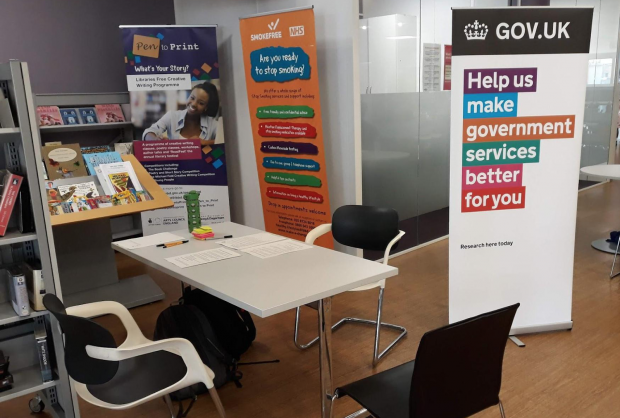 I’m a frontend developer. I’m used to sitting in front of my computer, pressing keys and staring at my screen. I’m also an introvert, so my chosen career path suits me just fine.

I’m not a user researcher. The idea of talking to people, especially total strangers, fills me with varying levels of quiet dread. So when I suggested in a meeting a few weeks ago that we should stop what we were doing and do some user research, I really didn’t know where it was going to lead.

Certainly not to Dagenham Library a week later, where I found myself on a sunny Monday morning with my colleague, Jeremy. He’d organised the trip and I had helped with a few details along the way, including several meetings with one of our user researchers who’d provided some great guidance and information.

But she couldn’t come with us, so we were on our own – a designer and a frontend developer asking members of the public to help us make GOV.UK better.

We were going to conduct pop-up research. Without a proper researcher or lab conditions, we'd accepted it was going to be less than perfect, but we still hoped to get some useful insights.

Our hypothesis was that searching for things on GOV.UK using a mobile device needs improvement. We wanted to ask members of the public to try finding some things and then tell us what they thought. It sounded simple, but there was a lot to prepare.

Even little things, like where and how to set up our table, turned out to be something we had to think about – it was important that both the interviewer and the person taking notes could see what the participant was doing.

We had a good spot near the foot of the stairs and a big GOV.UK banner. We had consent forms and pens and post-its. We had four hours to speak to people. We even had a bag of sweets as rewards for participants. We were ready.

We started walking around the library to scout out likely participants, slowly improving our approach as the day unfolded.

People with children were out – parents have enough to deal with without also telling us about their search experience. People with headphones on clearly weren’t interested in talking to us. Individuals were ideal because we could talk to them without anyone else joining in.

By the end of the day I think I’d perfected my approach. I would stand by the banner, make eye contact with someone, and say, “Excuse me, we’re doing some research for GOV.UK – do you have a few minutes to help?” as quickly and clearly as possible. Many people were too busy to talk to us but most rejections were polite.

After a while I realised that I wasn’t asking everyone I could – I was automatically avoiding people based on certain criteria. If someone was old, they might be hard of hearing. If someone didn’t have English as their first language, getting them to understand the task might be difficult. If someone looked scary, I was scared of them.

Once I realised this, I decided to fight against it, and asked the scariest looking person I could see. They turned out to be really helpful and friendly and not at all scary.

What I always learn from user research is that you can’t predict how anyone is going to use a website.

You know that thing you spent weeks working on that’s going to really help users? Turns out most of the time people don’t even notice it. That happened at several points. And that other thing that you reworked and improved and agonised over? Turns out it’s still not clear to users. That also happened several times.

One participant’s phone text size was set really high and some of the text didn’t scale properly. Another was so stumped by what we thought was a minor bug that we almost had to stop the session.

Another used the interface incorrectly, but still ended up with the intended result. Others interacted with elements on the screen but didn’t notice that anything had changed. These are all valuable insights that we’re going to look to address.

By the end of the day we’d achieved more than I’d hoped. Eight people had participated in the research, and we’d seen some really thought-provoking things. What’s more, we’d met some really interesting people. It was an enlightening, exhausting and thoroughly enjoyable experience.

I have a lot of respect for people who do research for a living. Getting strangers to stop and listen to you is hard. I’m glad I’m a frontend developer, but it was a great experience to be a user researcher for a day and to see firsthand how much work goes into it.