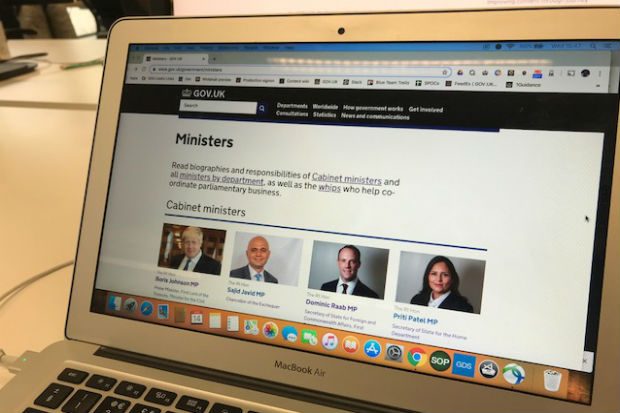 When there are changes to the Cabinet, we need to update GOV.UK as quickly as possible to represent what’s new, as well as preserving the history of what went before. July’s Cabinet reshuffle was a big one. The GOV.UK content team worked with colleagues at the Cabinet Office to:

These are tasks we don’t do very often and when we do, it’s often a time when a lot of eyes are on GOV.UK and many tasks need to be done at once. There's also no review mechanism for these kind of changes - they're live as soon as they’re made - so we want content designers to feel confident and supported while making them.

Who’s responsible for what

Cabinet Office manages the facts - who the Cabinet ministers are now, how the Ministers page on GOV.UK should look and the history of government. They also manage how, when and where ministerial changes are announced. GDS content designers support Cabinet Office in making the changes to ministerial roles and biographies.

GDS offers our experience from planning previous reshuffle changes and our expertise in the publishing platform. We also involve developers from our Platform Health team to:

Lastly, our delivery managers solve any issues blocking our work and make sure everything is well organised and runs smoothly.

We created a rota of content designers covering from 8am to 11pm for every day that the reshuffle was taking place.

How we prepared for uncertainty 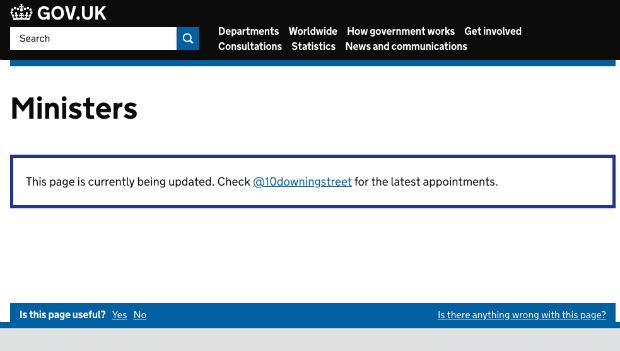 Clearly we don’t know in advance the scale of changes we’ll need to make and what the changes will be when a reshuffle is announced.

To prepare for this, we did some scenario planning with people across different roles and teams within GOV.UK. We thought up the most complicated tasks that might need to be carried out and what we thought the maximum amount of work we might need to do was, so we could be prepared for every eventuality.

Most GOV.UK content designers in GDS had not worked on a reshuffle before. We trained as many as possible - 26 in total - to make the sorts of changes that might be required. This meant that, even if dealing with the maximum amount of work we could conceive of, we’d have enough people available to lend a hand. This also meant knowledge of how to carry out the work was shared by many content designers rather than just a handful.

We organised a dry run of the reshuffle to see how GOV.UK would respond to a high number of changes to the sorts of content items which are affected by reshuffles (people, roles and organisation pages). Not only did this allow us to catch any problems with the publishing system, but it had the added benefit of giving all the content designers another opportunity to practise making the changes.

What worked well and what we’ll iterate for next time

Despite the work going smoothly, there are a couple of things we'll improve for next time.

Some of the work took place over the weekend, and that meant groups of people working remotely. We’ll think about better ways to communicate the changes when teams are dispersed, while still communicating securely.

Although our dry run caught a couple of publishing issues which could be resolved before the reshuffle, we had some bugs with reordering ministers on departments’ pages, where our changes weren’t displaying straight away. We’ve made a full list for next time of everything which needs to be changed in a reshuffle so it can all be tested in the dry run.

Now that the reshuffle is finished, we’re holding a retro with everyone involved and documenting what we did for next time.

GDS content designers had created documentation from a previous reshuffle. This was great as it steered us as we got started organising this work. We've built on it and made it bigger and more detailed in the hope that we can save even more time and energy scoping the work required next time there’s a reshuffle.

This was a fantastic team effort, with many teams across GOV.UK and many colleagues at Cabinet Office involved, as well as colleagues in other government departments. Thank you to everyone who brought their expertise, time and energy to the table.