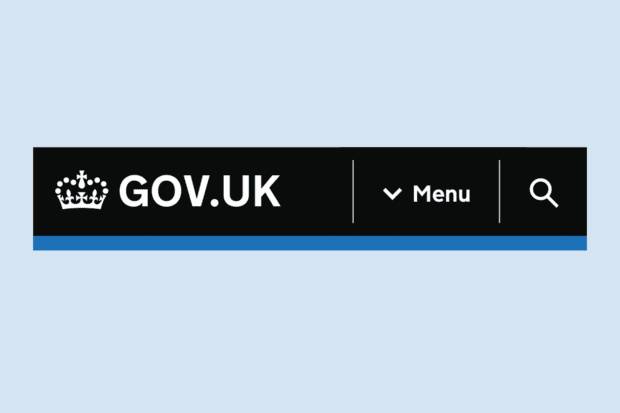 Back in May we wrote about our plan to improve the navigation on GOV.UK and our goal of making government information and services easier to find.

Our team’s work addresses 3 problems we identified in our discovery phase which affect users’ ability to find things on GOV.UK. These are:

A few months on, we wanted to share what we’ve delivered so far, and what comes next.

If you’re a frequent user of GOV.UK you may have noticed the first of our changes going live. This is the introduction of a consistent sitewide menu bar, which now appears at the top of more than half a million GOV.UK pages.

This new menu bar replaces the 3 different menu bar styles we previously used, and it allows users to browse the site by: 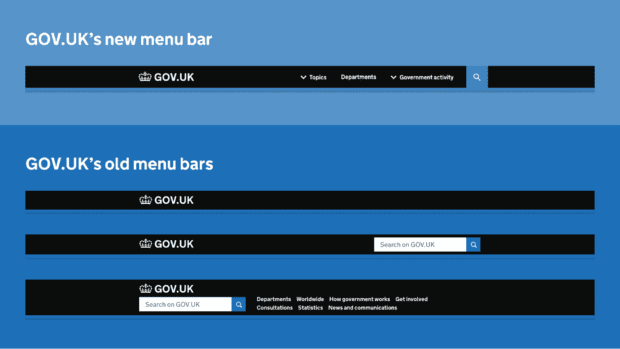 Why we changed it

The core principle of the new menu bar design is that users shouldn’t need to understand the structure of government to find what they need.

This is why we introduced ‘Topics’ as the primary way of browsing from the menu bar. It’s usually much easier for someone to pick a topic like ‘Driving and transport’ than it is to work out whether DVLA, DVSA, Highways England or the Department for Transport publish the information they need. 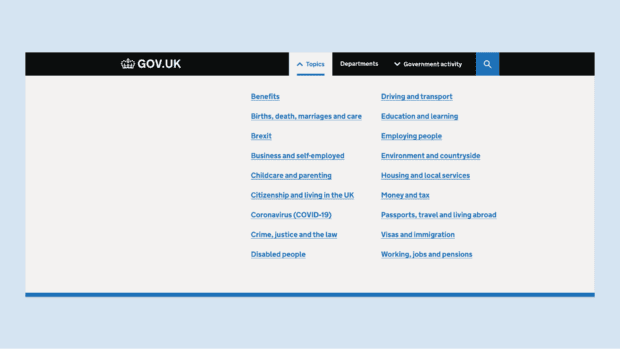 We know that some users do have a clear departmental model of government, and this is why we decided to carry over the use of a ‘Departments’ link from the older menu bar into these designs.

In user research, we also observed a smaller third group, who are looking for specific kinds of information, often in a research capacity. For example, journalists looking for transparency documents, statistics or press releases. We’ve grouped these formats together under ‘Government activity’. We chose this name to differentiate the long-tail administrative content in this section from the more user-centred information and services presented within ‘Topics’.

Using these 3 elements, our goal was to make it clear how government information and services are organised, and present these as navigation options consistently.

Following several rounds of usability testing, we introduced the new menu bar as an A/B test in August. This meant GOV.UK users were randomly assigned into one of 2 groups. One group saw the new menu bar, the other group saw the existing menu bars. This allowed us to directly compare the impact of the 2 approaches.

We found that during the A/B test period:

These A/B test metrics, combined with our usability testing, gave us confidence to roll out the new menu bar design sitewide.

A second iteration of the menu bar

Alongside the A/B test measurements, we also reviewed browsing data to map the common paths users took after using the new menu bar. This data comes from our users who opt in to cookies that measure website use.

We found that the journeys for users who selected ‘Topics’ from the menu bar were largely successful, with most users arriving at a content item or service start page.

This finding highlights the difficulty of navigating government information by organisation, in part due to the complexity of how the UK government is structured.

Having clicked on ‘Departments’ the user reaches a simple but lengthy organisation list page, this requires them to choose from 23 ministerial departments, 20 non-ministerial departments, plus 416 government agencies and other public bodies. This is the kind of complexity that we don’t want users to have to deal with unless absolutely necessary.

The findings also suggest that the prominence given to ‘Departments’ in the new menu bar design is leading some users unnecessarily into this complexity. In our next iterations we’re going to trial some ways to give greater prominence to ‘Topics’ and test different approaches with the ‘Departments’ link. Our first step will be to move the ‘Departments’ under ‘Government activity’ (shown below). We also plan to test alternative naming options for ‘Topics’ to make the proposition clearer, for example, ‘Information and services’. We’ve also added a ‘Sign in’ link’ to our designs, this won’t go live immediately, but is part of our planning for the rollout of the GOV.UK Account as part of the one login for government strategy. 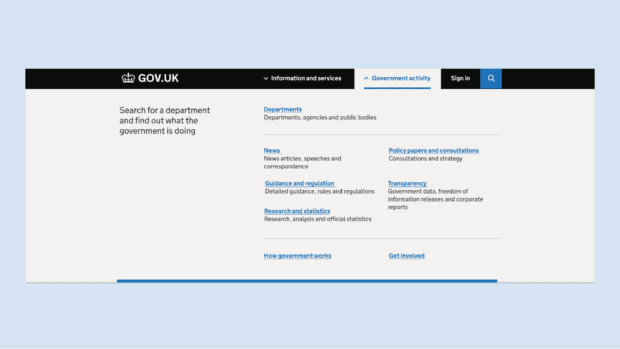 As before, we’ll be monitoring the user journeys closely to understand the impact of these changes, and sharing what we learn.

The menu bar is one of 5 elements we’ve identified as critical to browsing the site. These are the:

We’ve been prototyping and testing updates to all these elements so that they function together as a consistent system. Following the menu bar iterations, the next element to be updated within this system will be the GOV.UK homepage, and we will be blogging about this soon.

GDS is hiring - come join us!